This will be the first summer for me as a full-time employed man.

Perks:
-For the next 2 months I have Fridays off!
-We get to were casual clothes every day (i.e. shorts and flip flops)
-Exactly 22 work days (not counting staff retreats, College Summit, and other events)

Bummers:
-No kids around to hang out with
-TONS of summer projects to finish before the school year starts again
-Exactly 22 work days finish those summer projects

I love working in this nonprofit because I get to be as creative about the program as I want to be, but that also holds a huge responsibility to make sure that the program that I am running is perfect. We’ll see how all the planning goes this summer. I’ve been leaving this out of my blog for a while out of fear for any legal ramifications, but I feel that now I can safely assume that everything is fine and this information should be OK to post.

Several weeks ago, my brother took Utada, my beautiful Honda Element, out on a joyride without telling me. Actually this happened at 4 am on the morning that he was supposed to drive me to my office in East Palo Alto (about 35 miles away from where we live in San Francisco) because at 6 am I was supposed to be on a bus headed to LA with 25 of my kids. So here I was waking up at 4:30 am to get ready to go on our LA College Tour, and I go to find my brother but he wasn’t in his room. I call him and he gives me the horrifying news that a De Soto taxi ran a red light and hit him on the passenger side. 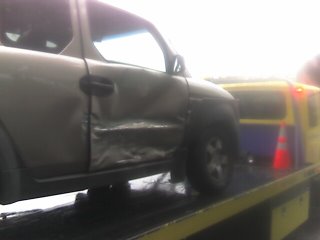 Thankfully, and I praise the Lord, no one was injured. However, Utada was not driveable, and I still had to be in East Palo Alto by 6:00 am. An $85-taxi ride later, I make it to East Palo Alto on time to go on the 4-day trip.

I realized that there was no use being upset with my brother because:
A) He would just play the I’m-upset-that-you’re-upset-at-me game, and would nullify my reason for being upset
B) Getting hit by the taxi wasn’t necessarily his fault, except for the fact that he was not allowed to use my car, and if he hadn’t been driving around, it never would have happened
C) Even if I got upset over it, that would change anything and would not help the situation.

Well, all I have to say is thank the Good Lord for insurance because if it weren’t for AAA, I don’t know who would’ve paid $8,500 for the repairs it took to fix my crumpled side doors, broken front axel and everything else.

And now after a few weeks of having my repaired car back, it doesn’t even look like anything happened at all to it! Good job Matt’s Auto Body.

Anyway, I’m ranting now, but I thought I’d just give you a slice of what I’ve been having to deal with in the past few weeks… and hopefully you’ll forgive me for not writing in my blog recently. Last night I got home from a long plane ride from DC (with a layover in Denver). I got to SFO, took the BART to 24th St. Mission Station, arrived home at about 12 and promptly went to sleep.

Back to work now…

It was crazy! Imagine pouring rain, 400 miles of driving, six kids in each car, early wake up calls and a late night. But all in all, the kids and staff had a GREAT time, learned a lot about the schools, and bonded. It was well worth it, but when I got home on Saturday night, I fell asleep from 8:30 pm to 8:30 am. Then I went to get pancakes at Chloe’s Cafe, went back home, and slept again from 10 am to 1 pm.

here are some choice pictures from the trip (my minivan was the coolest because we had a DVD player and could watch movies). It was cute because I felt like a dad driving all the kids around. And the best part was that they were all very well-behaved.

I had Carlos, Elizabeth, Enrique, Cindy, Alex and staffmember Anne in my car. It was a great ride. I can’t wait to be a dad so I can go on camping trips with my kids. haha!

Next week is the LA College Trip, and luckily I do NOT have to drive for that. We are taking a charter bus. The trip, however, is supposedly more exhausting because it’s four days and three nights. At least it’ll be in LA and everyone loves LA. Ha!

The spring time is a busy time around the BUILD Business Incubator.

I’ll be in the following locations in the next few months:

Lots of traveling! That’s why it’s a Saturday night and I’m sitting and resting at home. I gotta save my energy for the coming weeks…

So I went to New York to celebrate being alive, well and healthy for the March 6 re-birthday. I really wanted to finish writing Part 2 of the story that I started a year ago–The Prediction–but the working life isn’t very conducive to creative outside projects. It is one of my New Years resolutions, however, to finish Part 2 and I will have it by the end of the year. 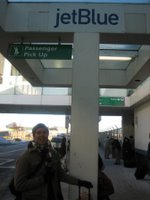 Tony and I took a red eye flight from LA and SF, respectively, and we arrived bright and early on Friday morning. 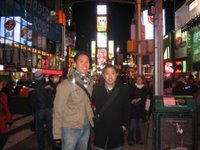 Being from California, I didn’t realize it would be so freakin cold in NYC. I was really unprepared for the weather and had to buy ear muffs, more clothes, etc.

We went to this delicious dessert restaurant called Serendipity 3, and everyone else had these awesome chocolate desserts, but I couldn’t eat any because I gave up chocolate for Lent! 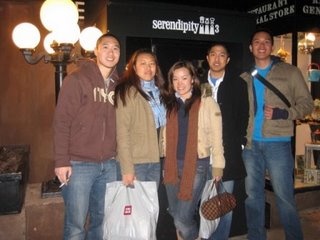 Cory, Wendy, Connie, Tony and Me in front of the restaurant. 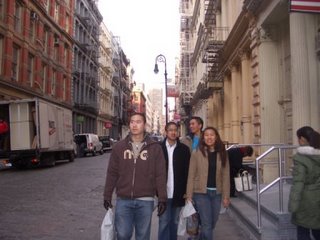 Walking down a Soho side street.

Anyway, I didn’t take any pictures because I was in New York mostly to just experience NY life. Tony and I stayed at Kevin’s house while Kevin was on tour. He was nice enough to trust us while he was away! We went barhopping with Jess’s friend Philippe (sadly I don’t have any pics with him!), saw Avenue Q on Broadway, and ate lots of good food. I realized when I came back to work on Wednesday that it was great to get away because NYC is full of adults and I hang out with kids all day. Sometimes it’s just a good reminder that adults are out there, too!

While waiting for my flight back home at JFK airport, I was having a nice little chat with an older gentleman from Fort Lauderdale about equipping boats with wireless internet via satellite. He told me that he had just flown from Long Beach to install modems and satellite receivers on some rich guy’s boat so he could use the internet while at sea at the whopping rate of $7.00 per minute for a 7k (slow) connection. He elaborated that a usual charge per month could reach up to $2000 to $3000 per month. All this just to be connected while at sea where there are no wireless towers around.

And here I am attached to the wall with a charger I just bought for $58. Kevin (who kindly let Tony and I use his apartment in NYC) accidentally took my Treo charger and I have been without juice for the last 3 days. I was surrounded by people in the city and yet I felt so disconnected. I didn’t have phone, text messages, emails or the net! Everywhere we went, I scoured for cellphone shops and electronics stores to look for my charger or to at least get a charge for 5 minutes. After a while, I resigned myself back to the 1990s–back in the days when cellphones weren’t attached to the hips.

It felt scary, liberating, and lonely all at the same time.

I remembered that we humans have a basic need. Love. Connection is my way to receive and send love.

Perhaps I need a healthier channel?

At the Apple store in Soho, I googled Palm stores and found one in JFK. My plan was to go to the store, ask if they could charge my phone and then be on my merry way. I didn’t realize it’d be such a hassle:

A) My flight was in terminal 6 and my charge was in terminal 9. You need a boarding pass to pass through securit check, and somehow I managed to get snatch up a special gate pass afte haggling 4 people.

B) For extra precaution, the lady that gave me the special gate pass ordered that I be searched from head to toe– you know the “special” suprise search they give people after the conveyor belt and metal detector.

C) After walking another mile through the terminal to find the Palm store, they said it was store policy to not charge people’s phones. Understandable, but I was desperate.

I asked myself: what is the price of feeling connected?

I had just checked my voicemail through Tony’s cellphone–only a couple messages. So I knew that I didn’t have anypressing matters waiting.

But I kept thinking… What if? What if someone I loved were to try to contact me? Afterall, March 6, only a day before was the 4-year anniversary of the accident that changed my life and the lives of my friends. I would have liked to give and receive phone calls for my re-birthday. And indeed one of the messages I received was from Regan, but without a phone number (trapped in my phone), I couldn’t call to show my love, appreciation and respect.

I suppose the price of feeling connected turned out to be $58 (bargained down 10% or perhaps the salesman just felt really bad for me) for an international travel charger + cradle. I figured since I will still have a charger once Kevin mails it back to me, I should buy something different and something I can use at work.

Connection at last. But is this real? I find myself searching for an outlet in the terminal like a wolf searching for prey. And once I find an empty outlet–next to the satellite internet installation guy from Fort Lauderdale–our little chat makes me realize that I am far too dependent on things electronic. While I’m not paying $3000 for an internet connection on a boat, I think it’s ironic that the boat-owner would go to great lengths to leave civilization only to want to feel connected via the internet.

I’m not trying to make any profound statements here but let’s just say that I’m not going to be installing internet on my boat any time soon (not that I have a boat, but you get the point).

Rey | This msg was sent via Treo

Half asleep, I grin at the cuteness.

I feel like this is pretty indicative of how Filipinos work. No prior planning is necessary to have an outing, a party or an event. So I call back and agree to meet them in Tracy at 6:30 am the next day. I didn’t really know what was in store for me, but I knew I needed a vacation.

Sunday
I’ll let the pictures speak for themselves: Click on the picture above to check out the rest of the pictures from the snowboarding trip on my Flickr account. Thanks to Tita Cecille for taking all these cool pics!

At first, I was actually kind of scared to go snowboarding. The last time I went snowboarding was about 6 years ago and the snow was hard and icy and I fell A LOT. It was painful and I wasn’t very good. This time, my little cousin Celine and I took some beginners lessons. I was actually pretty good, and it was the most fun I had in a long time. I definitely want to go snowboarding again before the season ends!